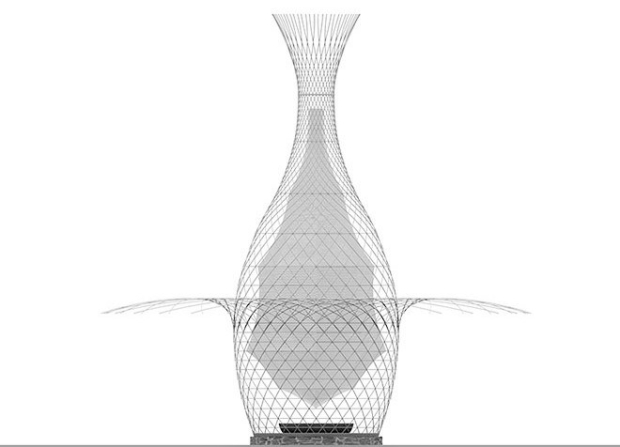 A very practical solution, to a serious problem. Water is the most precious resource on earth, something that we take for granted here in the developed parts of the world. However the struggle for drinking water is real, killing millions of people world-wide.  Designer Arturo Vittori believes the solution to this catastrophe lies not in high technology, but in structures that looks like giant-sized baskets. TheWarkaWater towers are conceived for communities in rural areas like Ethiopia, which lack access to safe drinking water.

The WarkaWater towers have a height of 12 meters and can gather up to 100 liters of clean and drinking water per day.  The tower weights around 90kg and consists of 5 modules which can be built and assembled by local villagers without the need of scaffolding or electrical equipment. The conic shape improves stability and the ‘crown’ is designed to keep the birds away.

The architecture of each pillar is comprised of two sections: a semi-rigid exoskeleton constructed by tying stalks of juncus or bamboo together and an internal plastic mesh, similar to the bags oranges come in. The water is collected by harvesting atmospheric water vapor from the air.

The nylon and polypropylene fibers act as a scaffold for condensation, and as the droplets of dew form, they follow the mesh into a basin at the base of the structure. “WarkaWater is designed to provide clean water as well as ensure long-term environmental, financial and social sustainability,” Vittori says. Each tower costs approximately $550 and can be built in under a week with a four-person team and locally available materials. “Once locals have the necessary know how, they will be able to teach other villages and communities to build the WarkaWater towers.”

This model is intended to for larger numbers of people and can also serve as a social gathering point for people in the village. However the villagers can perhaps make their own versions using local materials that they produce themselves. Maybe even create smaller versions that cover the needs of just a family for drinking water.

One may wonder where did the inspiration to create such a beautiful and ingenious design came from. The name and design is inspired from the giant Ethiopian fig tree ‘Warka’ traditionally used for public gatherings. The almost gravity-defying, and dome-shaped tree is native to Ethiopia, sprouts figs, and is usually used as a community gathering space.

View all posts by Alex Cojocaru