So, it is now my pleasure to invite you in another journey of thoughts. An exploration of time, with a different dynamic than what we are used to. A different natural order of events, or better said an alternative perception of time. A journey so strange which may potentially stretch, bend or break our current paradigm of thinking. After all, the consciousness stretched by a new idea may never return to it’s previous dimension.

We have been conditioned to perceive time as a linear process. A one way street on which we all pass through in our life journey, leaving behind an irreversible collection of events. We are thought that no one and no thing can escape time and that everything is bound to it’s temporal orientation (past > present > future). As might be expected, one can think of some things which may prove to be an exception to this rule. The gravitational pull of black hole is so powerful that not even light can escape it. It is said that time slows down as one approaches a black hole, ultimately reaching a stop at the event horizon. But slowing down time and potentially stopping it, does not really change the orientation of it’s linear continuum. A more interesting concept is that of the hypothetical particle called Tachyon. Such a particle may travel faster than the speed of light, thus making time travel (backwards or forwards) possible. If Tachyons really exist one could possibly build  a tachyonic antitelephone which is a hypothetical device which could be used to send signals into one’s past.

Of course, these are just theories which are backed up by consensus knowledge of theoretical physics. These theories and concepts are not consistent with the known laws of physics and may cause paradoxes in our understanding of causality. But just because we are not (yet) able to comprehend such ideas doesn’t necessarily imply impossibility. After all, most of the things which we perceive as absolute sources of truth are substantially based on conventions. Consensual agreements based on mind made theories which are based on our perception of logic. Our collective belief systems shape the way we perceive reality and our sense of true or false, of right and wrong. But does that make it real? Not so long ago most of us believed that the Earth was flat. As our collective mental faculties evolved over time we came to realise a deeper truth. Is this set in stone? Of course not, it’s not implicit that our mind processes will continue to evolve. There are a lot of debasers out there (check this out). Who knows what might become of this absolute truth or others of similar regard.

One may argue that reality is something that never changes after you stop believing in it. But is that true? Or does that even mater in the context of our experience? If we believe in something strong enough, what is becomes worthless. Many theories in science but also in religious or spiritual texts promote the idea that we shape reality with out thoughts. It’s a very empowering idea, one of my personal favourites which I incorporated high up in my own web of belief systems. But with great power, comes great responsibility.

So, can you have a flower before the seed? Can you do something now and affect the past, or do something in the future that would alter the present?

In theoretical physics there’s a concept called retrocausality which is basically a hypothetical phenomena or process that allows and effect to occur before it’s cause (retro-causation). This term is regarded as a philosophical idea but it is based on elements of physics. Paradoxes in time travel theories address a similar topic which is also mentioned in retrocausality discussions. A good example is the grandfather paradox which is a popular paradox of time travel theories.

Oh, snap! You thought Vader is going to say “Luke, I am your father”, didn’t you? It turns out we got it all wrong haha. There’s even an official website where you can find many other Mandela effects.

But leaving monkey business aside, I still think that retrocausality is an interesting thought experiment. Even if it proves to have no scientific base whatsoever, it is still a valuable philosophical exercise because it has to do, most importantly, with how we perceive time. Time is nothing more than a conventional metering of natural or mechanical processes. One day is the process in which our planet completes one rotation around it’s axis. One year is the process in which our planet completes its orbit around the sun. Because we live to see a limited number of sunrises and an even shorter number of seasons in our lifetimes, we attributed a deep meaning to time.

More importantly, time is the most indispensable convention by witch our society functions. Having this universal convention has helped our evolution since the earliest of times. From the earliest stages of sedentary societies, which used time measurements for agriculture purposes to the complex technology we have today. 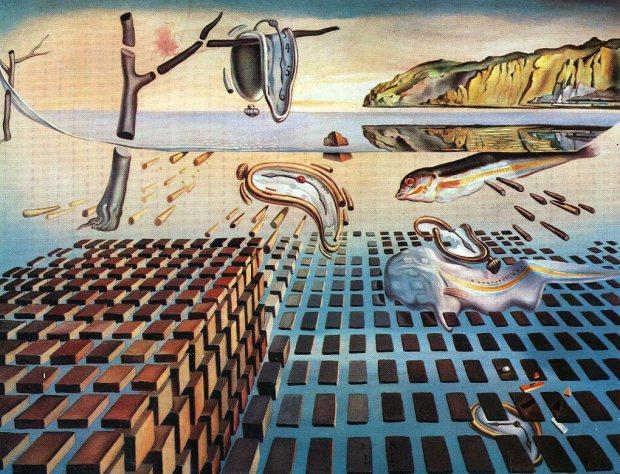 The Disintegration of the Persistence of Memory – Salvador Dali, 1954

Culturally, time has a similar notoriety associated to it, being everlastingly present in our art, lifestyle and technology. From Dali’s melting clocks, to the very materialistic saying “time is money” our minds are bound to it.

Having all this backlog of mental conditioning, it is very difficult to snap out of this paradigm of thinking and try to reconsider or reformulate it in a non-confusing way. Everything that we experience and everything there is, just happens. There’s no master clock watching over everything. In the grander scheme of things, there’s just one manifestation of something, which I believe has no particular end or beginning. We know too little about existence in general and those who claim to know more may actually know less.

If you would ask me if it’s possible for a flower to blossom even before planting it’s seed, I would say yes. Even more so if we (all decide to) believe it to be true. Life is what we make of it. I prefer to be a romantic myself and indulge in this type of ideas and enrich my imagination with endless possibilities (even if just in my mind), instead of limiting it with theories of right and wrong. Doest that make me loony? Maybe.

P.S.: Because it like to dip my mind in all sorts of places, some time ago I came across this documentary: Athene’s Theory Of Everything. It’s on the subject of conscious experience and perception. Although it’s not peer reviewed and not scientifically nor philosophically rigorous, many of it’s conclusions are supported by links to articles and papers in the field of neuroscience. Also, please note that this documentary is made by an online celebrity, most commonly known for being a professional gamer and poker player. It’s still and interesting documentary nevertheless, but just treat it as one’s personal opinion or rant.

Alex has been active in the software world since he started his career as an Analyst in 2011. He had various roles with a focus on software asset management, data analytics, and software development. He walked in the shoes of an analyst, auditor, advisor, and software engineer being involved in building SAM tools amongst other data-focused projects. In 2020 he joined Licenseware as a co-founder and CEO, with the mission of commoditizing software asset management. View all posts by Alex Cojocaru

2 thoughts on “Retrocausality, flower before seed”

We is WEB APE, personal project where we chose to abandon the arrogance of humans and embrace the ignorance of apes.